“We have done the heavy lifting” was how Benjamin Diokno, governor of the Bangko Sentral ng Pilipinas (BSP), described efforts by the Philippine central bank in tackling Covid-19.  He shares that in total, the monetary authority has injected some 1.9 trillion pesos (US$39.1 billion) into the financial system since the start of the pandemic.

Speaking at the 15th annual Philippine Summit organized by The Asset with the theme “Innovating the Way to a Shared Future”, Diokno responds to concerns that despite BSP’s efforts by injecting liquidity into the system, loan growth has remained anemic. “That’s understandable. Monetary policy works with a lag. We are still not open; we don’t expect the business sector to increase their borrowings. In the first place, there is [also] excess capacity in many industries at this time. Consumers are still not allowed to go out unrestricted.”

However, he maintains that “there are signs that things are picking up. The monetary policy has done enough, although there are still a lot of bullets in our arsenal.” He cites the fact that the policy rate has been reduced by 175 basis points since January while the reserve requirement for banks has been cut by 200bp.

On stimulating demand, he shares that it was the government’s decision to open up carefully and slowly. But “now they realize that has caused the contraction of the economy,” he notes. “Now, they have decided to speed up the opening.”

Among the other speakers who shared their insights on the topic “The Philippines in the Post-Pandemic World”, Elina Ribakova, deputy chief economist at the Washington DC-based Institute of International Finance, notes that Asia as a whole, and the Philippines in particular, is in a much better position than other regions with “the economic contraction shallower, and the recovery sharper”.

“But it is critical to get the pandemic under control,” she stresses.

On the question of how long the Philippines can hang on amid the pandemic, Ribakova believes there is no doubt the country, including the large conglomerates, can hold on for a very long time. The question, however, is a lot of Filipino families are likely to left behind in the recovery, and this will have political repercussions.

On a positive note, she says that remittances have continued to come in. Remittances, in fact, have overtaken foreign direct investments in size, and this has helped not only the overseas workers’ families in the Philippines but also in financing their small businesses, which will contribute to speeding up the recovery.

According to Diokno, the decline in overseas remittances will not be as bad as previously predicted (as much as a 20% drop). The most likely scenario is that the fall will only be around 2% this year. 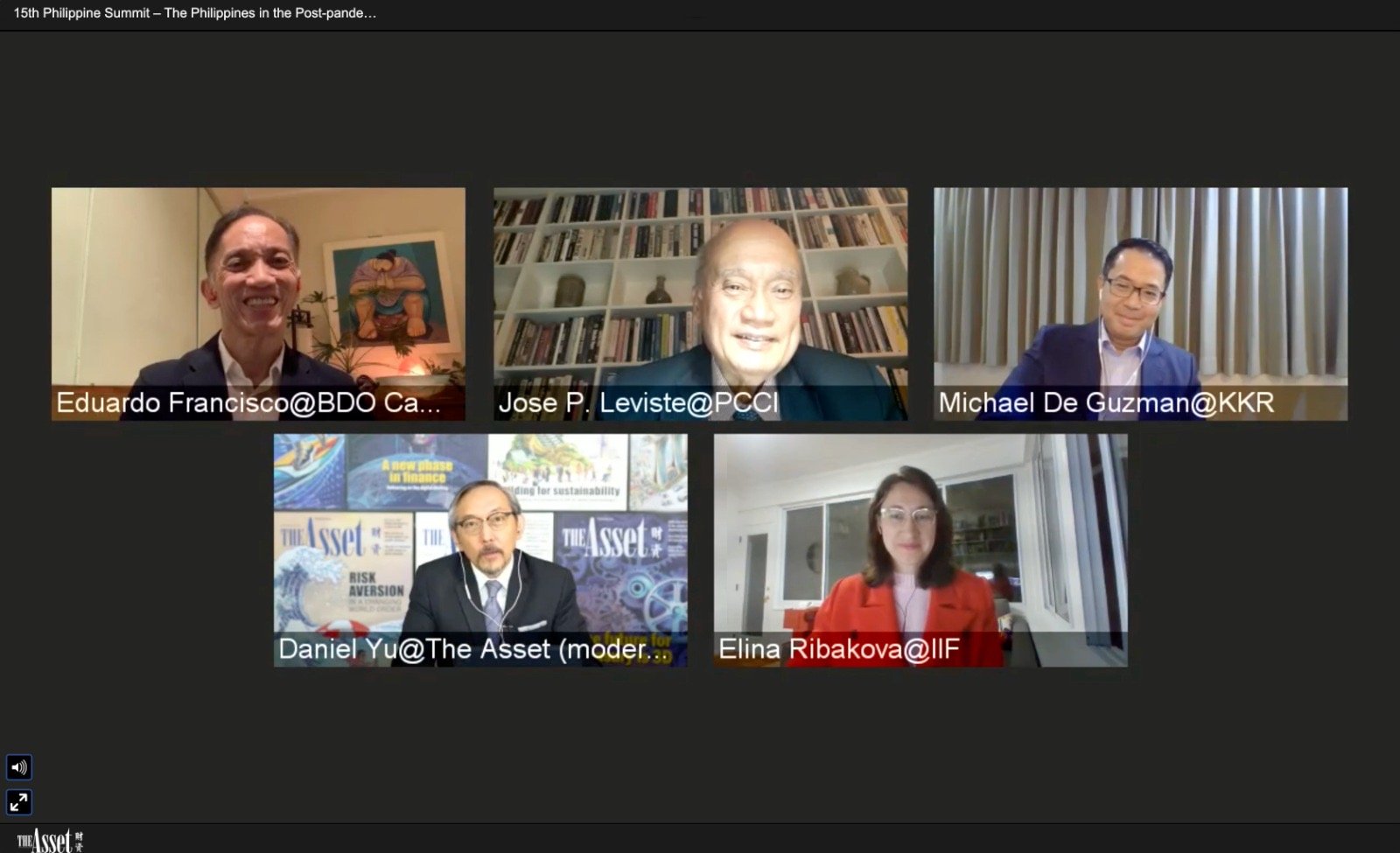 Speaking in the same webinar, Joey Leviste Jr, chairman of AG&P and director of the Philippine Chamber and Commerce and Industry, cites a recent survey showing that President Rodrigo Duterte has improved his approval rating during the pandemic to 91%.  Leviste says although critics have cast doubts on the accuracy of the survey results, he personally believes it because a lot of people appreciate the efforts that his administration has taken to help them cope with the crisis, although his performance is not perfect.

Michael De Guzman, managing director of KKR, tells the webinar that they continue to look for opportunities in the Philippines because they take a medium to long-term investment perspective.

He cites the case of their investment in First Gen. When they initiated the transaction sometime in March, the Covid-19 outbreak and lockdown had already started, and they completed it at the end of June. “So we were (strong) in our belief that despite Covid affecting the near-term results of the company, it will still have a measure of resiliency, such that when we look at our five or ten-year outlook for our Philippine partners, we are still comfortable that the Philippines is still an attractive place for us. Time will tell if we are correct.  But it is true that KKR has been very bullish about the country... We continue to look for opportunities.”

Eduardo Francisco, president of BDO Capital and Investment Corporation, notes that the large conglomerates in the Philippines are very liquid, “so instead of disposing, they are ready to acquire, but not on a predatory basis. So when they see a business that can be helped with, they are ready to come in."

He also notes that corporates have learnt their lesson from the last financial crisis. They are tightening their belts and reducing their capex. But although most shopping malls are not fully opened yet, in view of Covid-19 restrictions, imports are coming in and inventories are being prepared for the coming Christmas season.

Part two of The Asset+ 15th Philippine Summit – Innovating the Way to a Shared Future, on the topic of Innovation in the Philippine Capital Markets, will be live streamed on October 21 at 5pm HKT please see more details here

Please also check out here Bangko Sentral ng Pilipinas Governor Benjamin Dioko's exclusive Q&A session with The Asset on the lessons learnt from the Covid-19 crisis, and what the country must do to hasten the recovery from the pandemic.